Florida’s rich railroad history is directly tied to industrialist Henry Flagler, a name not necessarily well known among the state’s millions of residents. But if it wasn’t for Flagler and his railroads, Florida would likely be a very different place today. Not only did he build the Florida East Coast Railway from Jacksonville to Miami and the coastal luxury hotels that brought tourists, he established Florida’s agriculture industry by providing economical use of the rails to merchandize crops. His museum housed in his former home is probably the best place to start a journey into Florida’s railroad past. The museum is one of eight railroad museums across Florida.

Flagler had founded Standard Oil with John Rockefeller and quickly became an icon of the Gilded Age, along with Henry Ford, Andrew Carnegie, Thomas Edison, J.P. Morgan and others. But when his wife became ill and needed the humidity of Jacksonville to convalesce, he saw opportunity in the undeveloped landscape here. He eagerly promoted tourism and the agricultural industry that remain the foundation of Florida’s economy more than a century later, and is known as the father of both Palm Beach and Miami. 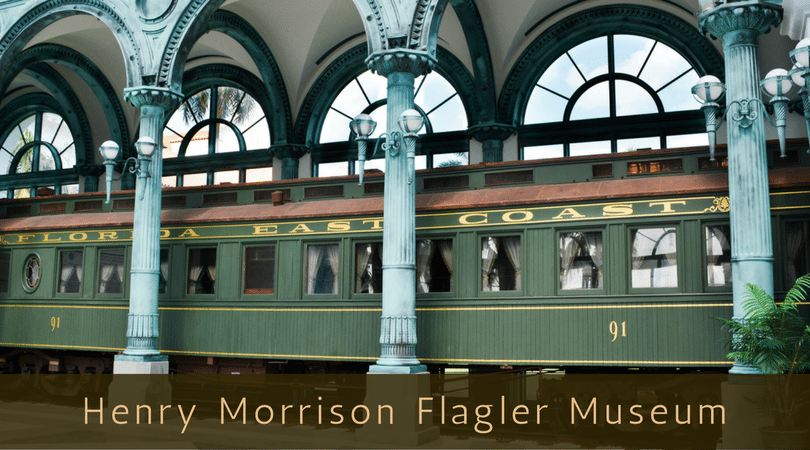 Flagler also undertook what is considered the biggest and most complicated building project ever attempted by an individual — the construction of the Over-sea Railroad
from Miami to Key West. Flagler was called the builder of “The Eighth Wonder of the World” when the project was completed in 1912.

Meanwhile, his beautiful Palm Beach estate, Whitehall, drew acclaim as “grander than any palace in Europe” and served as his winter residence from 1902 until his death in 1913. Refurbished by his granddaughter, Whitehall became Florida’s first museum. Today Whitehall houses the museum where visitors will discover the Gilded Age, what some consider the most fascinating period in American history, and see Flagler’s private Railcar #91, exhibited on the museum’s south lawn. Built in 1886 for Flagler’s personal use, the railcar was acquired by the museum in 1959 as an artifact of Florida history and an important part of Flagler’s story. The museum is open year round Sunday noon to 5 p.m. and Tuesday through Saturday 10 a.m. to 5 p.m. Closed Mondays, Thanksgiving, Christmas and New Year’s Day. For visitor information go to www.flaglermuseum.us/visit.

After a visit to the Henry Morrison Flagler Museum to see Florida’s railroad history from the beginning, you can head south to the Gold Coast Railroad Museum in Miami to continue the story. The museum is a nonprofit organization dedicated to preserving, exhibiting and operating historic railroad equipment. It was started in 1957 by a group of Miamians who were trying to save pieces of Florida history that were taken for granted and rapidly disappearing. Some of the earliest pieces in the collection are the private railroad car, called the “Ferdinand Magellan”, built for President Franklin Roosevelt, and the Florida East Coast Railway locomotive 153, which is the engine that pulled the rescue train out of Marathon after a 1935 hurricane. There is also a 1913 Florida East Coast locomotive used in regular revenue service over the entire railroad. Open Monday through Friday 10
a.m. to 4 p.m. and Saturday and Sunday 11 a.m. to 4 p.m. For more information visit www.gcrm.org.

Another excursion nearby is Deerfield Beach and The South Florida Railway Museum, dedicated to providing the public with the history of railroading and how it affected the population growth and industry boom from the 1940s to the 1960s in the South Florida area. The museum’s mission is to teach through the use of railroad artifacts about the importance of railroads to commerce and development in the area, and through the design and building of a model railroad display depicting the area during that time frame. Open Wednesday 6 p.m. to 9 p.m. and Saturday 12 p.m. to 4p.m. For information visit www.sfrm.org.

The Railroad Museum of South Florida

Across the state on the west coast of Florida is The Railroad Museum of South Florida in Fort Myers. Located at the north end of Lakes Regional Park, the museum houses many artifacts, pictures, and model railroads. Just across from the museum is the largest miniature railroad in the state. Visitors can travel over 1.5 miles through Old World Villages among the park’s scenic wilderness. The museum and railroad are open Monday through Friday 10 a.m. to 1:45 p.m., Saturday 10 a.m. to 3:45 p.m. and Sunday noon to 3:45 p.m. For more information visit www.trainweb.org.

North from there is The Florida Railroad Museum in Parrish, Manatee County. The museum was founded in 1981 to acquire, protect, preserve and operate interesting and historic examples of railroad rolling stock, artifacts, and other aspects of railroad history, with emphasis on railroads that served the state of Florida. The museum operates excursion trains consisting of its own rolling stock each weekend, year round. Trains include open window coaches, air conditioned coach and lounge cars, and cabooses, operated entirely by volunteers. The museum is open Wednesday through Sunday 10 a.m. to 4 p.m. year round. Diesel train excursions operate most weekends at 11 a.m. and 2 p.m. For more information visit www.frrm.org.

In the middle of the state is the Central Florida Railroad Museum in Winter Garden near Orlando, a circa-1913 railroad station housing locomotive memorabilia and old train cars, plus displays for kids. It is part of a quaint town that serves as a major stopoff for bikers and walkers on the popular West Orange Trail. Just down the street is another depot which houses the Chamber of Commerce. Open daily 1 to 5 p.m. For information visit www.wintergardenpost.com.

In the Panhandle is The West Florida Railroad Museum in Milton, preserving the railroad legacy in Northwest Florida and South Alabama. The museum centers on the L&N Railroad and includes a railroad depot built in 1909, caboose, cars, and model railroad telegraph. Open 10 a.m. to 3 p.m. Friday and Saturday or by appointment for tours. For more information visit www.wfrm.org.

Right outside Tampa in Plant City is the Robert W. Willaford Railroad Museum and train viewing platform. The museum is in downtown Plant City’s historic train depot, and the platform is located adjacent to the museum. Visitors enjoy an interesting collection of rail equipment, beautiful grounds and fascinating activities. Viewing platform open seven days a week 24 hours a day and well-lit for great train viewing in the evenings. Museum hours: Monday-Wednesday 12 p.m. to 4 p.m. Thursday-Saturday 10 a.m. to 4 p.m. For more information visit www.willafordrailroadmuseum.com. 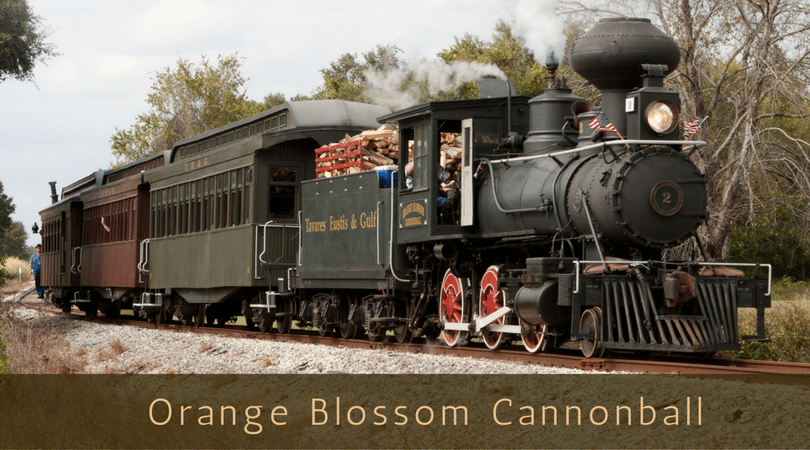 RVers interested in trains can also enjoy a unique opportunity in Central Florida to not only see historic trains but take a ride on locomotives used in numerous movies over the years. The Orange Blossom Cannonball is the Central Florida train on the Tavares, Eustis and Gulf Railroad. Riders board at the historic downtown stations of either Mount Dora or Tavares for a round-trip of an hour and 45 minutes travel time, and can stay longer for shopping or eating in either village before re-boarding. The vintage coaches pulled by the 1907 wood-fired steam locomotive on most Saturdays and holidays or the 1941 diesel locomotive other days are the actual cars seen in more than 20 movies, including “True Grit” and “3:10 to Yuma.” For locomotive scheduling and information visit www.orangeblossomcannonball.com.