Was the 2017 Solar Eclipse the RV event of the year?

Now that the Great American 2017 Solar Eclipse is over I thought it would be a very good time to examine whether or not it lived up to all the hype. Recently, you couldn’t turn on the TV or open a web browser without some ad relating to the Solar Eclipse. The last time anyone in mainland US saw a total eclipse of the sun was on February 26, 1979. With that, I decided not only to check out the eclipse, but also make it a “boys only” RV trip. 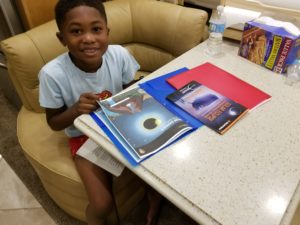 Mom thought it would be great if the boys studied up as much as they could about the Solar Eclipse. That plan worked perfectly as part of their homeschool science studies.  So glad that I’m the RV trip planner in the family and started my planning early. Since getting to the path of totality was only a few hours drive, I figured if we were going, better try to get the best view. So I settled on Greenville, South Carolina as our viewing city. It was smack in the middle of the 70-mile path of totality. We stayed at a great campground, The Traveler’s Rest KOA.

A total Solar Eclipse is not that rare, in fact, they happen somewhere on Earth about every 18 months. A total eclipse of the sun that can be viewed from US Coast to US Coast occurs much less frequently. In fact, the last time a total Solar Eclipse was visible from coast to coast was almost 100 years ago, and that one occurred on June 8, 1918. What makes this eclipse so special is that it will be the first time since January 11, 1880, that a total Solar Eclipse will occur exclusively over the continental United States. 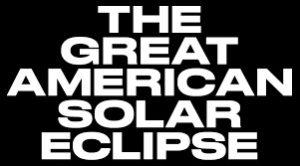 That’s right no other country will see totality, although many countries will see a partial eclipse of the sun. Hence, this eclipse being called the Great American Eclipse.

Since we had a few days before the eclipse, we had plenty of time to explore the vicinity. I decided that I would take the boys to enjoy some of the vast hiking in the area. The boys headed into the KOA office to get suggestions for hikes. 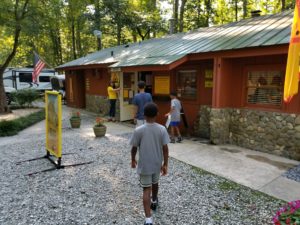 I followed to find a good local joint to have dinner. Over the next two days, we enjoyed two incredible hikes, both with stunningly impressive views of waterfalls. 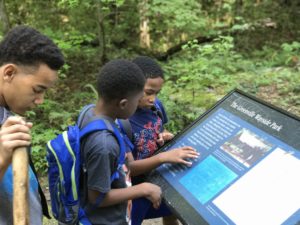 The boys got excited to be hiking the trails at Wayside Park.  This was a locally known park right off the main highway, very easily missed without the knowledge of what to look for.

We arrived at our eclipse viewing location a few hours before the start time of the eclipse. I had heard how bad traffic would be and wanted no part of it. After getting set up, we had plenty of time to practice with our glasses.

With the eclipse beginning, it appeared as if the Moon was taking a bite out of the sun. As the eclipse progressed, the sky around us got darker, and the temperature began to drop. It became eerily quieter as the birds stopped singing. We settled into our chairs to view the show, not wanting to miss a second. 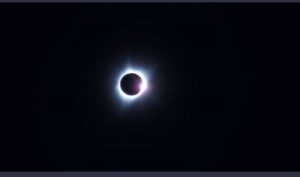 There was a countdown for the beginning of totality. Totality is the only time when one can see the corona, the sun’s atmosphere. As it began, there was a huge roar and applause from the crowd. I didn’t even realize that I was cheering and yelling right along with the rest of the crowd. The kids and I took off our glasses to see this incredible cosmic site with our own eyes.

So did the total Solar Eclipse live up to the hype?

For my boys and me, the answer is YES! They all repeatedly shouted, “This is the coolest thing I’ve ever seen.” For me, a Father who has witnessed the birth of my five children got drafted into the NFL, and married a woman who is the answer to my prayers…I was speechless. I felt connected like never before to the beautiful heavens. I’ve never felt so small and the heavens so vast. For me, I was blown away with the perfect handiwork of God.  People talked about those moments of viewing totality being a spiritual experience, I agree.  The two minutes plus we spent in the path of totality went by entirely too quickly.  The Moon began to move from totality, and we were told to put our glasses back on.

I will be reflecting back on this experience for weeks.  As we left the site and made our way back to the campground, I smiled as I overheard the boys saying, “this is the best day ever.” If you lived in the US and missed this event, you’ll have to wait seven more years, until April 8, 2024, to see a total Solar Eclipse from a location in the contiguous United States. I implore you to make plans to see it first hand. I promise you will not be sorry.

One last takeaway – RVing has opened our lives to so many wonderful, incredible experiences. I am 100% positive that if we had not taken up RVing, I would have settled to stay home and watch a partial eclipse. The RV industry sells us on making memories. This trip will stay with all of us as a top highlight for the rest of our lives!

Time to start planning for the next Solar Eclipse 2024. (Note: it’s already on our travel calendar)