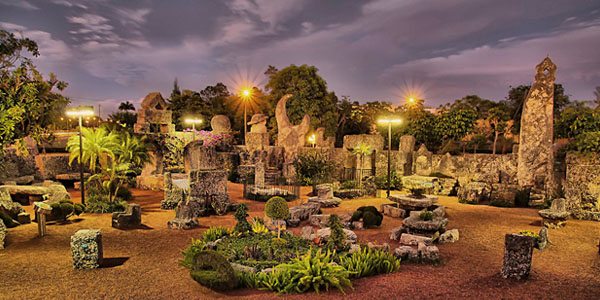 What inspired Edward Leedskalnin to spend 28 years secretly carving 1,100 tons of coral rock into a sculpture garden, with nothing but homemade tools? No one knows for sure, but Leedskalnin happily greeted visitors during the 1940s to his fantasy world called Coral Castle, charging a mere 10 cents for admission.

Today visitors from around the world receive tours from guides or choose audio headsets in four languages that describe the mysterious creations made single handedly by the 100 pound, five foot man. To this day, no one knows how Ed created the Coral Castle. Built under the cover of night and in secret from 1923 to 1951, at a time when there were no modern construction conveniences, Ed would only say that he knew “the secret of the pyramids.” When he died, his secrets died with him, and to this day scientists and thinkers still debate Ed’s methods.

Features of the Coral Castle Museum include a nine-ton gate that moves with just a touch of the finger, a Polaris telescope and functioning rocking chairs – all made entirely of stone.