Florida is home to a diverse array of wildlife. The state’s varying climates and ecosystems contribute to its overall biodiversity. One of the most intriguing animals in the Sunshine State is the Florida Panther. This feline is a carnivorous animal that lives in swamp forests, hardwood hammocks and pinelands. Despite being native to the state of Florida, this panther has come close to extinction in the recent past. In the 1970s, there were only an estimated 20 Florida panthers left in the wild. The drastic decline in population was due to habitat loss and unsustainable hunting practices. Theses numbers have been raised to over 200 in recent years due to conservation efforts and wildlife sanctuaries.

Florida panthers are a unique species that is defined as a distinct puma subspecies. These animals have blue eyes and are normally spotted when they are young. These spots eventually fade with age, and the eyes turn to a more yellowish hue. As these panthers cannot roar, they instead make distinct noises such as whistles, purrs, growls and hisses. Male and female panthers can range in size from 100-159 and 64-100 pounds respectively. They have been illegal to hunt since 1948, and were listed as endangered in 1974 by the U.S. Fish and Wildlife Service. Florida adopted the panther as the state animal in 1982.

The natural beauty of these animals and their endangered state has piqued the interest of many visitors to Florida. People often wonder if these animals can be seen in the wild and where. Fortunately, there are several protected areas and reserves throughout the state of Florida where these amazing panthers can be seen. In fact, RV camping and traveling is a great way to see these animals. Since becoming a precious symbol of the state, Florida panthers have been closely monitored and protected. Officials have a good idea of where these animals are at any given time. 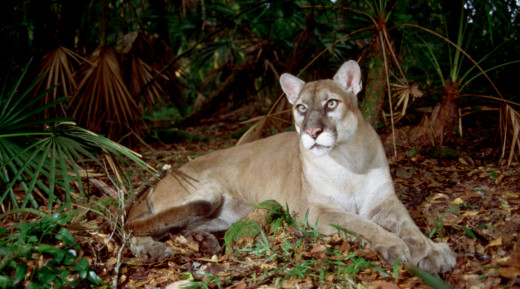 A Florida Panther in the wild. Photo credit fws.gov

The Florida Panther is generally concentrated in the southern portion of the state and can be found in several different reserves. Everglades National Park and the Big Cypress National Preserve are two major parks in which these panthers can be seen. The Florida Panther National Wildlife Refuge is a wildlife center where these animals can also be visited. Some of these locations offer RV camping and other accommodation options for visitors. As these Florida panthers aren’t seen on a normal basis, it may take a few days of patience to see one.

Visitors who don’t have a desire to see Florida panthers in the wild have a guarantee at the Naples Zoo.  The zoo has a rehabilitation center for panthers that have been hurt in the wild and one permanent panther resident named Athena. Panther Ridge Conservation Center is a wildlife center takes in and rehabilitates large exotic cats of all kinds that have been in accidents or rescued from captivity.  If you simply must see a Florida Panther, make sure to call in advance to see if there is one currently at the center. Visitors are given tours around this conservation center and have a rare chance to see these beautiful animals up close.  All proceeds go towards panther protection and conservation which is another plus..

There aren’t many other animals in Florida that can capture the imagination and wonder quite like the panther. Despite having growing populations throughout the United States, these animals often keep to themselves and are rarely seen in the wild. Florida is one of the best places to see these animals, but visitors must have patience. Driving around through Florida’s southern reserves and national parks may yield a unique opportunity to see these majestic animals in their natural habitat.

Video of Florida Panthers in the wild shot at the Everglades National Park: