Tin Can Tourists in Florida

If you’re an RV enthusiast traveling around the southeastern United States, you may have already heard of the “Florida tin can tourists”. But how much do you really know about them and their RV history?

These hardy adventurers harken back to a bygone era wherein 1919 the Ford Model T was the best selling car, and you could drive one off a dealer’s lot for the monumental sum of $500. That was the same year the Tin Can club came into existence.

In the North, industrial production dropped off after World War I. Laid-off workers had plenty of time and still had some money in their pockets. Instead of stressing, they headed for Florida. Fisher’s Dixie Highway, a newly paved road connecting the Midwest to Florida and the brainchild of Carl Fisher, made the trek possible. 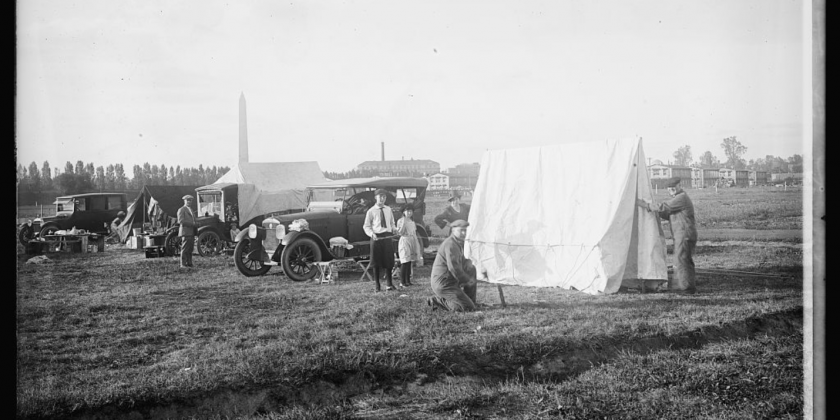 Tin Can Tourists setting up camp. Circa 1921. Photo provided by the Library of Congress.

It could still take two weeks or more though to get from Michigan to Florida. The first motel didn’t open its doors until 1925 (it was the Milestone Mo-tel Inn, San Luis Obispo), and there were no rest-stops or Ihops along the way.

It was only in 1910, nine years before the club was born, that the first car lovers had joined with nature lovers to customize their cars with bunks, inventive water tanks, and lockers. According to the Recreation Vehicle Industry Association, the very first RV was on a Pierce-Arrow chassis although as early as 1906 W. Gould Brokaw, the railroad tycoon had commissioned vehicles of a similar type. In 1911 one of the DuPonts commissioned a self-contained Stoddard-Dayton.

Most early travelers didn’t have the means to customize their automobiles, however. In many cases, they weren’t traveling self-contained at all, preferring to pitch their tents when night fell and warm a can of beans over an open campfire. Since no campgrounds or campsites existed at the time, these early tourists ended up spending their nights on the sides of roads.

In December 1919, Chicagoan, James Morrison got together with about 20 other autocampers at DeSoto Park outside Tampa and formed the Tin Can Tourists. Fairly quickly the Tin Can club became a popular way for early RVers to connect with one another. Admission into the club was cemented with a secret handshake, password, and a rousing chorus of “The More We Get Together”, the club’s official song. The group wintered in Florida and summered in Michigan. 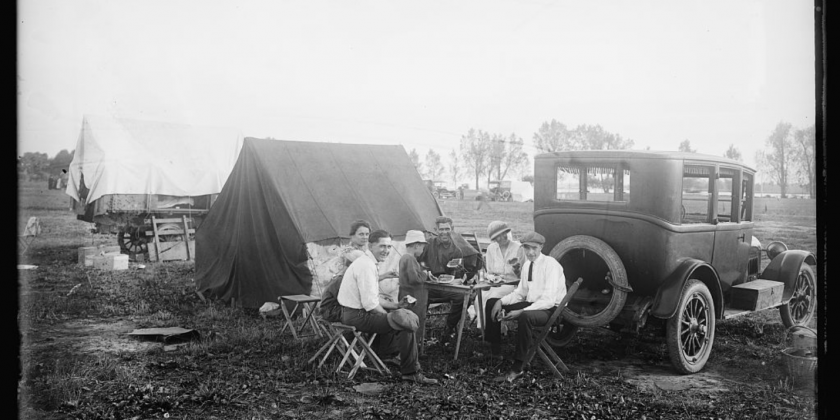 Tin Can Tourists relaxing at camp. Circa 1921. Photo provided by the Library of Congress.

As for where the name came from one speculation is that the early RVers ate from tin cans. We do know that a tin can on their radiator caps became their emblem. After growing from 30,000 members to 100,000, the club was a force to be reckoned with.

Florida Cities Get on Board

It didn’t take long after this for the local citizenry to realize what an economic boon these tourists provided. In 1932, Sarasota, Florida became the official site for a tin can club gathering. RVers were even driven from the camps into town by the town merchants.

The relationship between Sarasota merchants and the RVers hit a snag, however. In 1938 Sarasota decided the “tin canners” were a determent to its self-image and canceled its winter contract.

Tampa stepped into the vacuum and offered the campers a five-year contract. They even built a park just for them. The club numbers started to dwindle at the end of the 1940s though as the result of several factors:

By the mid-1980s, the Tin Can club had virtually disappeared.

Today and Into the Future

The club regrouped however and reemerged in 1998 with a convention in Florida. Today they are a global phenomenon with chapters in Japan, France, and England. In addition to maintaining its original goals, the club has added the preservation and promotion of vintage coaches to its agenda.

RV travel owes its heritage to the likes of organizations such as the Tin Can Tourists. Today RV enthusiasts travel in luxury motorhomes with tents that are easy to assemble and have all the creature comforts.

RVers in Florida have access to an abundance of leisure activities including boating, kayaking, swimming, fishing, hiking, and horseback riding, just to name a few. Today all of Florida welcomes all campers and relishes its part in their rich RV history.

For more information on the Tin Can Tourists, please visit their website tincantourists.com.

Are you a member of the Tin Can Tourists? Tell us about it in the comments below!