The Alligator Gar is one of the largest freshwater fish in the United States. In fact, this species outsizes a majority of other fish in the entirety of North America. The Gar is known as a euryhaline organism for its unique ability to thrive in waters with different levels of salinity. These fish can also breathe air and water. Many people refer to the Gar as a living fossil because of some specific characteristics that have been maintained over millions of years. In addition to their ability to inhale oxygen from the water or air, these fish also have spiral valve intestines.

What makes the Gar unique?

The Gar has received its nickname due to some physical characteristics which the fish share with the alligator, although these two animals aren’t related in any manner. The Gar has a series of sharp teeth and a long snout. Both of these are very common characteristics for alligators that live in the Sunshine State. According to some anecdotes, these fish can grow to be 10-feet in length. Although this isn’t a long length in comparison to the American alligator, the Gar can easily outsize most fish in the area. There isn’t a general consensus among scientists as to the maximum length of this species. 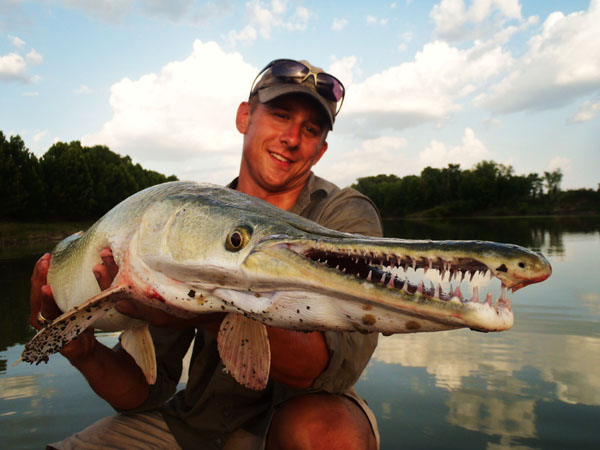 The Gar is easily identifiable due to its unique appearance. The torpedo-shaped body and long-snout are classic identifiers of this “primitive fish”. These fish normally have olive or brown bodies that eventually fade into a yellow or light grey color. At first glance, the Gar seems to have scales like that of any other fish. However, these scales are actually bone-like plates that have a protective layer of enamel. These ganoid scales are also serrated to ward off any potential threats. 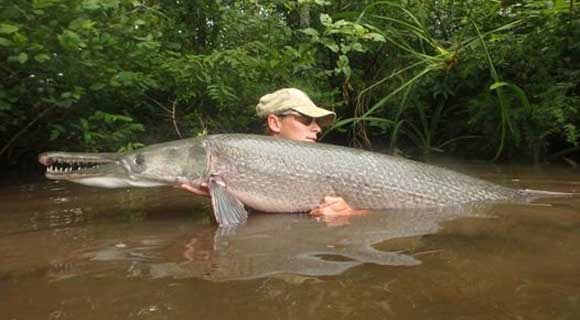 What does the Gar eat?

Unlike many other forms of Gar fish, the alligator gar sports an extra row of teeth for quicker and more lethal hunting. Interestingly, this extra row of teeth only exists on the organism’s upper-jaw. This is one of the many reasons that this species of Gar has earned its nickname from the American alligator. The Gar are piscivores who tend to stalk and ambush their prey. Due to their large size and jaw strength, however, some Gar hunt small mammals or waterfowl that are lurking near the surface of the water. This is another unique characteristic of these fish that isn’t found in many other species of fish.

Where can the Gar be seen in the wild?

Major swaths of the overall Gar population have been decimated due to habitat destruction. In fact, the surviving population only lives in a portion of what used to be the species’ historic range. These habitats have been destructed due to unrestricted harvesting, indiscriminate culling, and other unsustainable practices. Populations of the Gar are now restricted to the southern portion of the United States and parts of northeastern Mexico. This species of Gar is considered to be euryhaline due to their ability to adapt to different degrees of salinity. In other words, the Gar can adapt between areas with high and low salt concentrations. Because of this adaptation, the Gar can be found in many different ecosystems including estuaries, bays, freshwater lakes, swamps, and in the ocean.

Is this species offered any protection?

For decades, this species of Gar was considered a “nuisance” and “trash fish”. They were rooted out and eliminated by federal and state authorities throughout the country for their perceived negative impact on fishing practices overall. In the 1980s, scientists began to develop a more comprehensive understanding of complex ecosystems and the integral role which each member of that ecosystem plays. Authorities realized that the Gar needed just as much protection as any other species of fish. Over the past few decades, there have been some protective measures and laws put into place by federal and state agencies. The Gar is also protected by the Lacey Act. Many scientists and government agencies are actively tracking the Gar population in the United States and have invested money into educating the populace on this amazing species of fish. 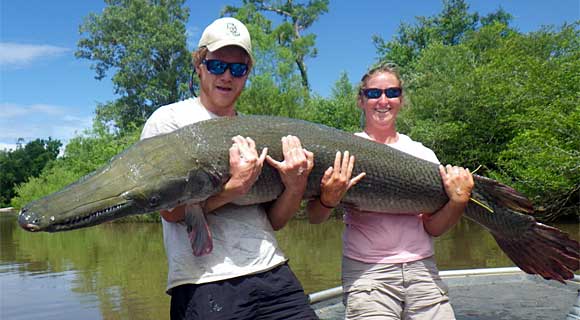 Where can the Alligator Gar be seen in Florida?

If you’re looking for a chance to see the Gar in person, an RV trip is the best way to accomplish this goal. While this species of Gar can be seen throughout Florida, the state’s panhandle has a higher concentration of these fish. There are many RV parks throughout the area that can be used as a launching point. Although Florida is a popular location to see the Gar, there are many other states in which this species of fish can be seen as well.