Tampa’s Lowry Park Zoo is not only a place to enjoy up-close animal encounters, behind the scenes experiences, and exciting rides, it’s also a center dedicated to the conservation of endangered 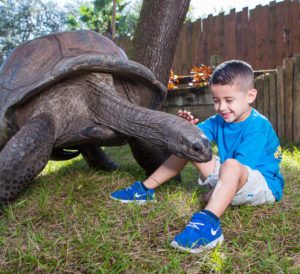 wildlife. The zoo takes part in almost 100 programs dedicated to breeding and conservation efforts with the goal of improving species survival rates around the globe. To support this award-winning conservation work, the zoo is equipped with unique, state-of-the-art facilities on its 56 acres. Rescued animals such as Florida manatees are brought in for rehabilitation and released back into the wild, offering zoo guests one of several unique opportunities to watch conservation at work.

Zebras, giraffes, kangaroos, koalas, chimpanzees, orangutans, and tigers are some of the rare and endangered species that live in natural settings at the zoo. The zoo’s collection now includes more than 1,200 animals. The visitor experience includes frequent interactions. A 16,000-gallon touch pool allows visitors to pet and feed stingrays and macaws soar above visitors’ heads to strategically placed perches through-out the zoo.

The zoo began in the 1930s as a small collection of indigenous animals such as raccoons, alligators and an aviary with a variety of exotic birds. During the 1950s, Tampa Mayor Nick Nuccio led an effort to relocate the animals to a more spacious setting. Land was secured further up the Hillsborough River near the neighborhood of Seminole Heights and the collection was maintained by the Tampa Parks Department. 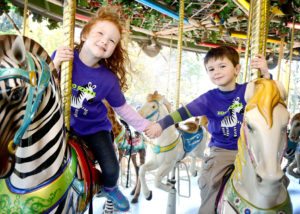 Lowry Park Zoo opened in 1957, sharing the site with Fairyland. Baby Boomers may remember it from their childhoods, a whimsical area accessible over a large rainbow bridge and dotted with statues depicting fairy tales and nursery rhymes. Other attractions and rides were added as the wildlife collection grew. When General Sumter Loper Lowry, the zoo’s namesake and a local resident celebrated for civic contributions and his service in several wars, gave the zoo its most prominent exotic animal, an 18-month-old Asian elephant, it provided the impetus for expanding and diversifying the collection.

In need of renovation in 1987, the zoo closed for a $20 million reconstruction. The original zoo and Fairyland were gone when the zoo reopened in 1988, with a Free-Flight Aviary, Asian Domain, Primate World and Children’s Village/Petting Zoo. Today the petting zoo is replaced by Wallaroo Station, a 4.5 acre Australian themed family interaction area, water play place and dining area.

Operated by the Lowery Park Zoological Society, the zoo allows the animals to live year-round in the naturalistic exhibits, as many of the animals are native to Florida or areas of the world with 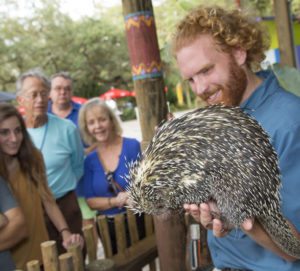 similar climates to Tampa. The zoo meets the highest standards of animal care, earning accreditation by the Association of Zoos and Aquariums. The staff works with many conservation partners, such as the Florida Fish and Wildlife Conservation Commission which rescues sick, injured and orphaned manatees found in the wild and transports them for treatment to the zoo’s David A Straz, Jr. Manatee Hospital, the only nonprofit facility of its kind in the world. The zoo’s veterinary hospital is the first in a zoo to receive accreditation from the American Animal Hospital Association.