The 7 Best Places to Find a Cuban Sandwich in Florida

Food counts as one of the best purveyors of culture that exists. As Nevana Stajcic said in her scholarly paper “Understanding Culture: Food as a Means of Communication,” “An apple is not just the red sweet object that you ingest for nutrition; it is the whole system that contributed to growing the apple: the sun, water, animals, human farmers.”

For the Sunshine State food tour enthusiast, this statement couldn’t be truer. From Vietnam to Cuba, world food culture converges in Florida. The whole history of the Sunshine State can be best experienced by biting into some of the state’s most delicious dishes.

Like most places that receives cultural transplants from other places, Florida is a place where ethnic food influences and is influenced by the cultures that make up this place. Case in point: The Cuban Sandwich.

What Exactly is a Cuban Sandwich?

On the surface of it, the Cuban Sandwich, or the Cubano, is the Cuban variation of that classic comfort food, the grilled ham and cheese sandwich. But it definitely has a twist, making this old standby something refreshingly Floridian and favorite among those who love RV travel in the state.

Here’s how it differs from the classic ham and cheese sandwich: It’s made with Cuban bread, which is a white bread similar to Italian or French bread. It definitely still has the ham, but it also gets a generous portion of sliced roasted pork.

And instead of having American or cheddar cheese, it comes with Swiss most of the time. Some sandwich-makers also add sliced dill pickles to the sandwich as well. 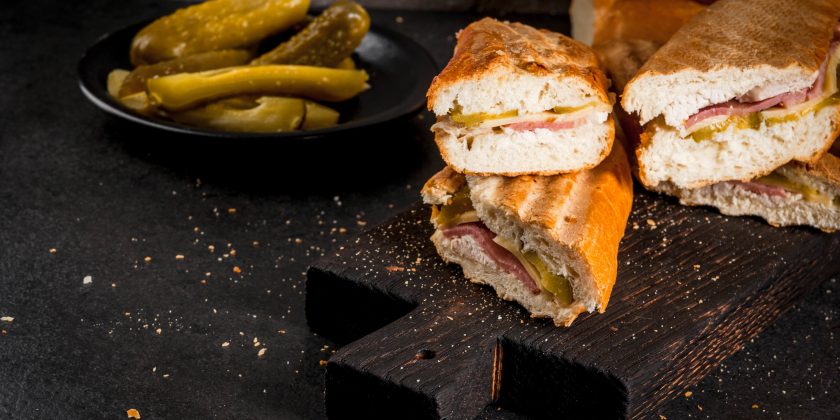 Where Can I Find the Cubano on my Sunshine State Food Tour?

If RV travel to America’s sunny Southeast is in your future, you’ll want to make a note to stop in the following places to find a Cuban Sandwich. Each place further adds its own twist to the Cubano, some of them significantly and deliciously so.

The City of Tampa

Tampa counts among the best places to try a Cuban sandwich, in part due to the fact that the city calls the Cuban its sandwich. Tampa restaurants also add salami to their Cubano sandwiches, making this version of the sandwich a delish, spicy alternative to the sandwich.

Places to Find the Cuban in Tampa

Recap of the Best Cubano Sandwiches

The Sunshine State is known for many great ethnic dishes, including the Cuban Sandwich, a delish alternative to the good old ham and cheese sandwich. While it’s possible to get a yummy Cuban sandwich in many places in the state, the seven restaurants highlighted in this post are especially known for making a great ham and cheese with a Cuban twist.