Tin Can tourism is an anachronism that had its origins in Florida in 1919. The main purpose of the group was to have places where auto campers could come together for fun. The rapid growth in the twenties and thirties brought people from all over the country who wanted to become members, which they did by an induction of a secret password and handshake along with singing “The More We Get Together” as the official song. The group held its winter convention in Florida while its summer session was held in Michigan. 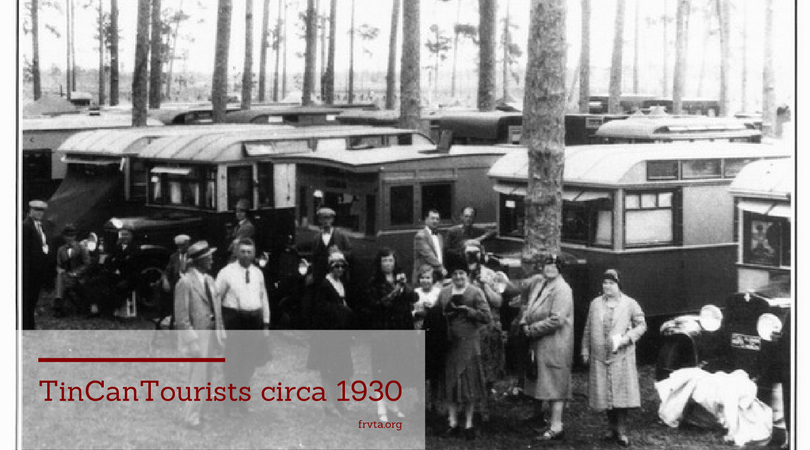 Cars were just beginning to be mass-produced, so it is safe to say that the majority of the members were middle class Americans. As rustic as it may sound today, those cars were able to be outfitted, sometimes using attached tents, with the necessities to make a camping experience very enjoyable.

Initially, local people did not embrace the group, but as the membership grew from 30,000 to 100,000, cities began to tout their presence because they provided an economic boon to the area. Sarasota, Florida became the official site for the festivities in 1932 when the Chamber of Commerce worked to positively sway the public’s vote. The town merchants even provided transportation from the camp into town. However, by 1938, the city’s officials had decided they did not like the perception of Sarasota as a location for “tin canners,” and they would not renew the contract for that winter. 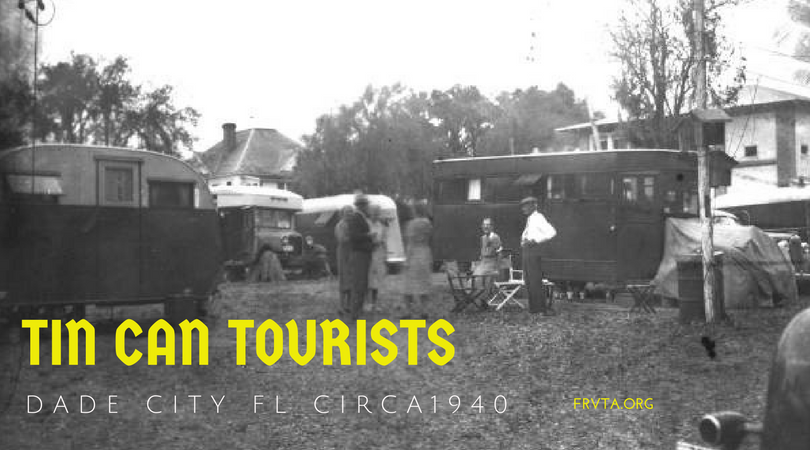 After Sarasota’s interest waned, Tampa proffered a five-year contract to the campers and built a special park for them. They returned, even though they had been booted out earlier. By 1948, membership had dwindled due to several factors:

The club went out of existence in the mid-1980s, but it was revived in 1998 and included all vintage coaches. They held the rebirth rally in Milford, Michigan with twenty-one rigs in attendance. More members were accepted by the end of that year. The Tin Can Tourists returned to Florida for its 2008 convention. They now conduct their gatherings in Florida, Michigan, and various other locations throughout the country. Its popularity has spread to France, Japan and England. The latest version of the Tin Can Tourists abides by the original principles and objectives but has added the goal of promoting and preserving vintage coaches.

The Tin Can Tourists Club was the forerunner of today’s RV travel. They were a far cry from current camping styles, where campers travel to sites in luxury motorhomes or have tents that are comfortable and easy to assemble. As the interest grew in this type of adventure travel, automobile makers added house cars to their production. The Coach Trailer Manufacturers’ Association was born out of the interest in this type of recreation. Manufacturers of camping trailers began exhibiting models of their products at these gatherings. As travel trailers developed and became more comfortable, more people became interested and the idea mushroomed.

It is interesting to note that the name of the original “Tin Canners” came from the notion that they mainly ate canned food. At least, that is one speculation. Their emblem was a tin can on the radiator cap. Today’s Tin Can Tourists display a metal emblem on the front of the car. Contemporary travel trailers, motorhomes, and campers have the comforts of home, including ovens, bathrooms, televisions, and microwaves that can prepare food pretty much as you would at home. Some even have dishwashers and laundry facilities.

As the oldest of the national trailer organizations, the Tin Canners have evolved into a club that is 97,000 members strong. They still have as their aim gathering to have fun. Most of them spend several months at a time in their trailer, and they are strict about safeguarding the hygienic nature of the campsites and being friendly and helpful to fellow campers. For more information on the Tin Can Tourists, please visit their website, tincantourists.com.

RV travel today in Florida offers campers a vast array of parks and camping areas in which modern campers delight. Things to do are also plentiful – hiking lush or rustic trails, swimming, boating, kayaking, horseback riding – just to name a few. The weather is pleasant and the accommodations are first rate. RVing in Florida offers a destination unlike other experiences you may find. The state is very welcoming to campers and goes out of its way to provide the interests and accommodations that everyone will enjoy.