This little gem of a state park is located at the confluence of the Tomoka and Halifax rivers on the eastern coast of North-Central Florida three miles north of Ormond Beach between St. Augustine and Daytona Beach. It offers a mixture of historical and natural attractions with numerous activities for visitors, from interpretive sites and wildlife viewing to boating and camping.

As a dwelling place for native American tribes sustained by plentiful fish and shellfish found within its tidal rivers and marshes, this state park is of significant archaeological importance and occupies a spot on the U.S. National Register of Historic Places. On this site stood the Timucuan Indian village Nocoroco. Later, part of the park became a British indigo plantation named Mt. Oswald. It became a state park in 1945.

A half-mile trail winds through a hardwood maritime hammock here. It follows the Tomoka Point Peninsula, the spit of land between the rivers. Flora along the trail includes wild coffee, resurrection ferns and live oaks naturally pruned from constant exposure to saltwater. From the state park, you can also venture onto the Ormond Scenic Loop and Trail. It is a 34-mile route that leads through subtropical forests, coastal dunes, and salt marshes. Trails allow for both hiking and biking. Bring your own bicycle or you can rent one nearby.

With over 160 species of feathered fauna, Tomoka State Park is nirvana for birdwatchers, especially during bi-annual migrations in spring and fall. Bird species include woodpeckers, cardinals, peregrine falcons, herons, pelicans, bald eagles, loons and ibis. Other wildlife viewed within the park includes gopher tortoises, West Indian manatees, alligators, and white-tailed deer. There are also several species of butterflies that migrate through the park, such as Phaon crescents, giant swallowtails, and juniper hairstreaks.

With easy access to both the Tomoka and Halifax rivers as well as the basin—a large, open water area northwest of the point—there is ample opportunity for boating, canoeing, and kayaking. There is a retail outpost located within the park that offers kayak and canoe rentals. You can launch from the concrete boat ramp specified for general public use and leave your vehicle in the adjacent parking lot. 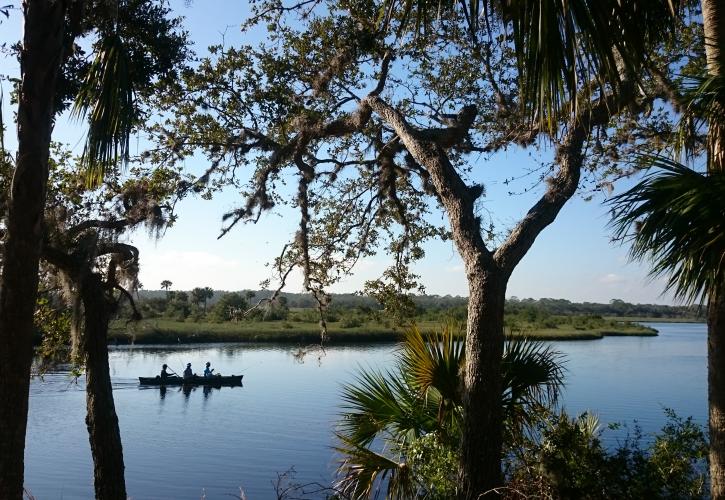 The waters of the rivers and basin are brackish, offering a variety of species available to catch, such as snook, black and red drum, sheepsheads and spotted sea trout. You can cast a line either from shore or boat. Bait and other supplies can be found at the outpost store within the park.

Like the park, the nearby attractions are an engaging mix of the natural and the historic. Adjacent state parks include Bulow Creek and North Peninsula, while historic sites in and around Ormond Beach include the Bulow Plantation Ruins and Historic State Park, the Hammocks, Lippincott Mansion, and the Casements, the former home of John D. Rockefeller. There are also plentiful beaches located on the barrier island. You can enjoy beachcombing, sun, swimming and even surfing along the Atlantic Ocean coastline. 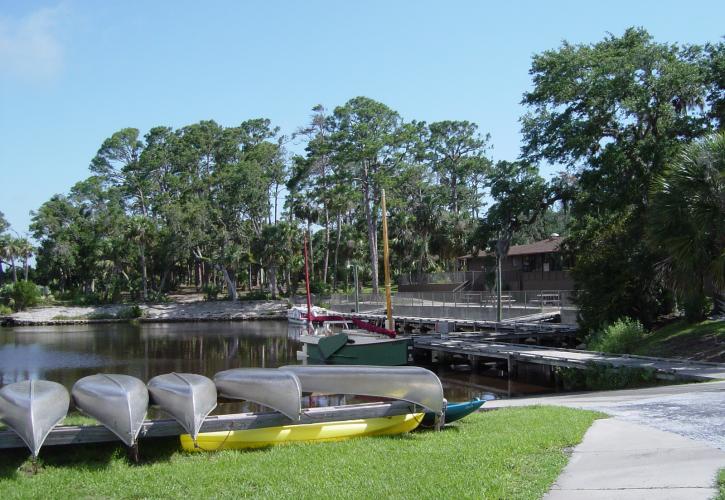 There are 88 tent or RV camping back-in sites at Tomoka State Park as well as one pull-through site. Three of the sites are handicap-accessible, including the pull-through site. Each campsite allows pets, up to 8 people per site and equipment lengths up to 34 feet. Amenities offered to campers include electrical hookups, sheltered picnic areas, numerous comfort stations with hot showers, dump station, grills and fire rings, ranger station and campground host. For more information go to the Tomoka State Park page on FloridaStateParks.org or call 386.676.4050. Park map download.